At the Mishima Mill, as part of the efforts to conserve energy and reduce CO2 emissions, we installed a combustion boiler that uses biomass fuel using wood chip and solid fuel RPF (Refuse Paper & Plastic Fuel) made from waste paper and waste plastic instead of conventional heavy oil boiler.

In January 2019 Mishima Plant began operation of a gas engine generator. Introducing this equipment enabled Mishima Plant to reduce its use of purchased electrical power (especially peak electrical power use). The generator’s 7.8MW output covers roughly 70–80% of the Plant’s electricity needs. For fuel, the generator uses natural gas, which produces little carbon dioxide (CO2) and nitrous oxide (NOX) and no sulfur-oxide (SOX) dust. One of the Plant’s targets in operating the gas engine generator is to reduce CO2 output by about 7,000ton a year. The waste heat from the generator is used by an exhaust-gas boiler to generate steam, which is used in the drying process of the Plant’s papermaking machines. The gas engine also strengthens the Plant’s business continuity plan (BCP), providing preparedness in case of disaster, thereby contributing significantly to the stable operation of Mishima Plant.

Air conditioning system in the support center in Mishima Mill 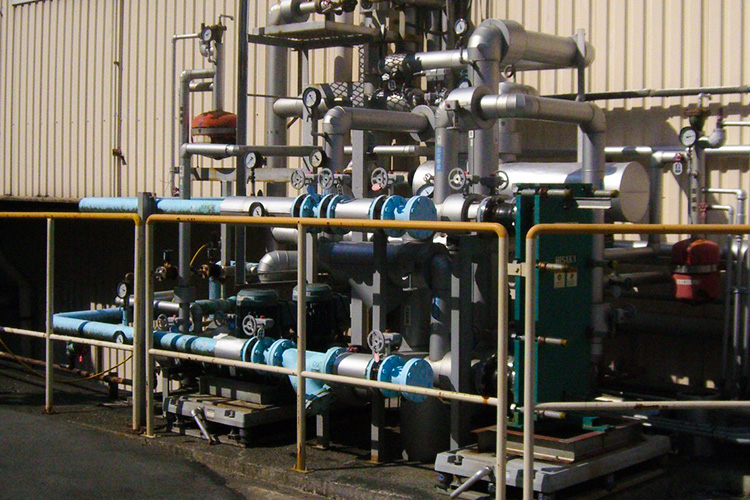 The air conditioning system in the support center of the Mishima Mill conventionally employed a method in which electrically cooled tap water is flown into a heat exchanger to cool the external air passing through it, however, in May 2011, a new air conditioning system was introduced, which enabled reduction of power usage by using spring water (approx. 16°C) used in the Mill directly as coolant.

The new system is capable of cooling indoor temperature to 26 to 27°C when external air is 35°C in summer, and the power usage is now approximate 1/10 that of the conventional air conditioning system. We are also considering introducing the system to other sites than the support center.

Being the mother factory of fancy paper, the production rate of deep color paper is high at the Gifu Mill. To prevent discharge of colored wastewater, in April 2004, we became first in the industry to introduce a wastewater treatment facility that decolorates wastewater through catalytic oxidation of ozone gas on colored wastewater. The equipment can inject 1,000 g/h ozone to 250 m3/h wastewater (max.) using 2 silent discharge ozone generators. The colored wastewater is mixed with the generated ozone and discharged into the Shinarata River as colorless and transparent.

The renewable energy is constantly replenished through natural activities. This type of energy is superior in that it not only contributes to reducing the environmental burden but is also effective in preventing global warming. The utilization of this type of energy is an issue that cannot be separated from corporate social responsibilities. We actively tackle the issue as part of our social contribution.

In 2014, we performed renewal construction work on the Akamatsu hydropower generation plant over about one year. The work was performed for the purpose of adaptation to the Renewable Energy Feed-in-Tariff Scheme. Currently, after construction, the plant produces the entire electricity equivalent to annual usage of about 16,000 households, which was previously generated at the Akamatsu hydropower generation plant.

Also, along with the renewal work of Akamatsu hydropower generation plant, we also improved the surrounding environment. In front of the main entrance we installed a screw that was running until just before the commencement of renewal work as a monument, which is surprising the guests. The former site of company housing adjacent to the plant was also renovated and transformed into a park where everyone in the area can visit to relax.

We consider installation of solar power generation equipment part of our initiatives for fulfilling our social responsibility and social contribution because it not only enables effective use of space in the plant premises but also contributes to reducing environmental burden through utilization of renewable energy.

We introduced solar power generation based on the Act on Special Measures Concerning Procurement of Renewable Electric Energy by Operators of Electric Utilities to promote energy creation while selling the generated electricity to electric companies using the full amount purchase system of renewable energy.